This holiday season I wanted to make some custom jigsaw puzzle gifts. The plan:

Randomly generating puzzles is a nice problem for beginners and tinkerers, so I wanted to write up the approach that I came up with. I'd love to hear from you if you attempted to do something similar, especially if you came up with different solutions.

I used Elm, because it has a nice way to produce SVGs, and it happens to be the frontend language I know best.

Sidenote: This post turned out to be longer than I anticipated! If you just want to skip straight to the code, it's at https://github.com/2mol/jigsaw-tutorial/.

I actually made two attempts, the first one being based on generating a Voronoi tesselation and making heavy use of elm-geometry. That approach had some subtle problems2, which made me go back to the drawing board for a second attempt.

I will not describe that approach in much detail, instead I'll walk you through a fully working solution based on my second attempt. However, if you're interested, you can have a look at my messy original code repo at https://github.com/2mol/elm-jigsaw.

Here is how I broke down the problem:

That's it for the high level view! It turns out however that you need to solve some smaller problems to make it work. You can have a look at the code on Ellie or the code repo of this tutorial.

See possible improvements below for some ideas about how to make the puzzles better, or polish the overall tool.

Here is what we'll try to achieve:

Setting up your Elm project

I'll assume that you have the Elm compiler installed. Here is everything you need to initialise the project:

Let me give you a skeleton for Main.elm. The commented out imports will be needed in a second, so feel free to uncomment them already:

I fixed this with a convenience function that parametrises the dimensions and draws a checkered background pattern. The code to this is not terribly interesting, but you can have a look at it here, or use it interactively in Ellie here. It will look like this: 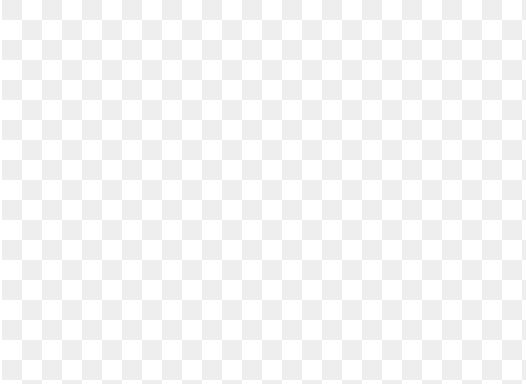 Amazing! With that out of the way, we start solving the actual problem.

With the benefit of hindsight, we'll abstract a couple of things: let's define some basic types and a top-level record that holds the parameters of our puzzle:

Again, the commented out parts are to give you a taste of what we'll need in a minute.

Now we need to make a grid of square pieces. Some thoughts:

With this in mind, I decided to describe my grid as a Dict of points. The keys are tuples that correspond to my (x, y) numbering of the pieces, and the points themselves contain their coordinates..

With a bit of programming 101, here is the function that gives us a dictionary of corner points for our grid:

Unless we can draw this, it's not going to be very useful. So let's draw some points

Checkpoint: you can look at this on Ellie, or browse the code repo at this point in time. 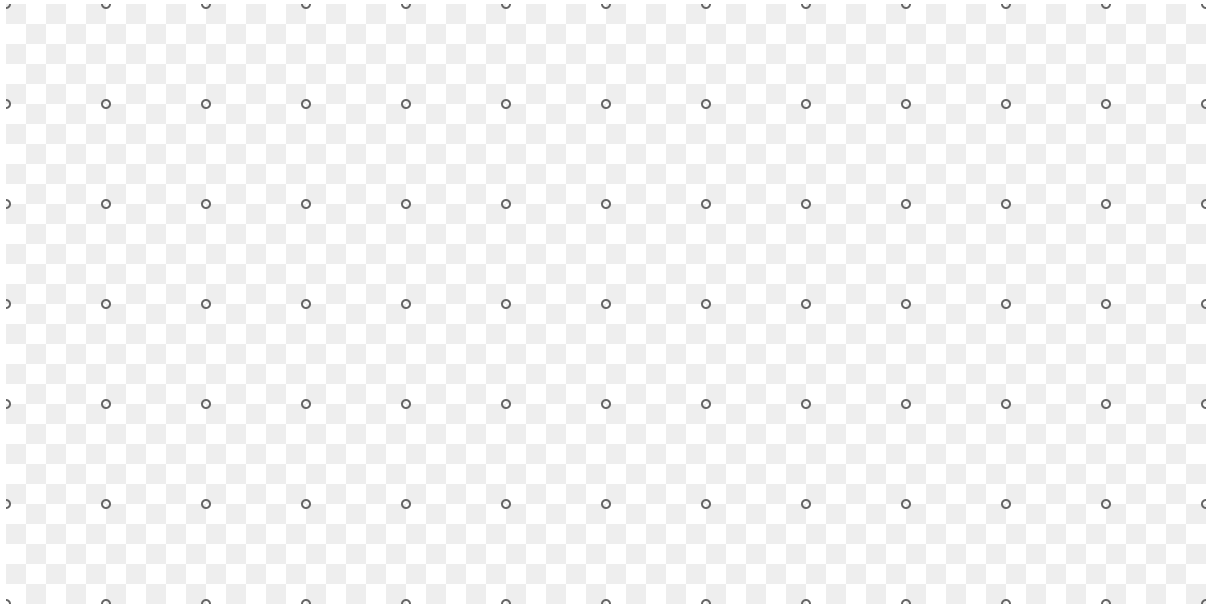 This seems nice, but unfortunately we still have some work to do. We ultimately want to work with edges, not corners. The challenge is therefore to find a function with the following type signature:

This is the kind of stuff I like solving as a programming exercise, so if you want to do that, now's the time.

Here is one solution:

It might be slightly more complicated than necessary, but I really wanted to have control over the sorting order. 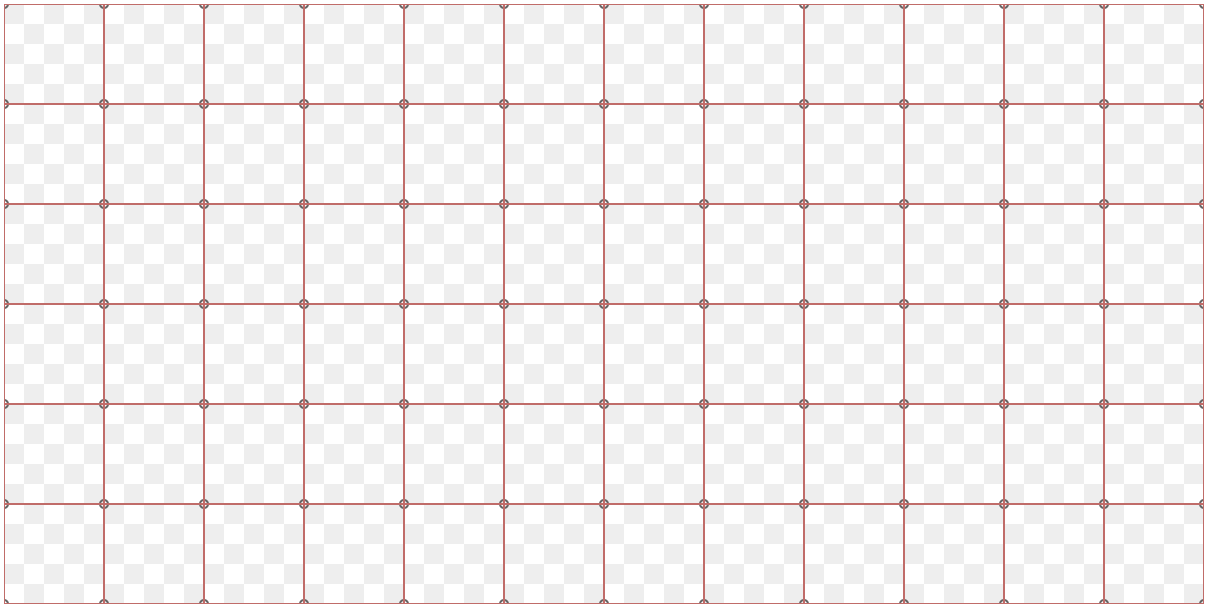 Here are the checkpoints for Ellie and the code repo for this step.

Time to make this grid less boring. The advantage with the setup we chose is that it's now possible to have a function that just transforms a grid Dict into another grid Dict. Here are the new pieces of code:

Again, this is mostly simple code, but it was fairly tricky to use Random the right way. It's easy to fall into the trap of using the same seed for a list of things, getting the same perturbation everywhere.

The rest of the above consists of some mundane logic to snap the outer edges back into the rectangular border shape. You could skip this to get a more interesting puzzle! 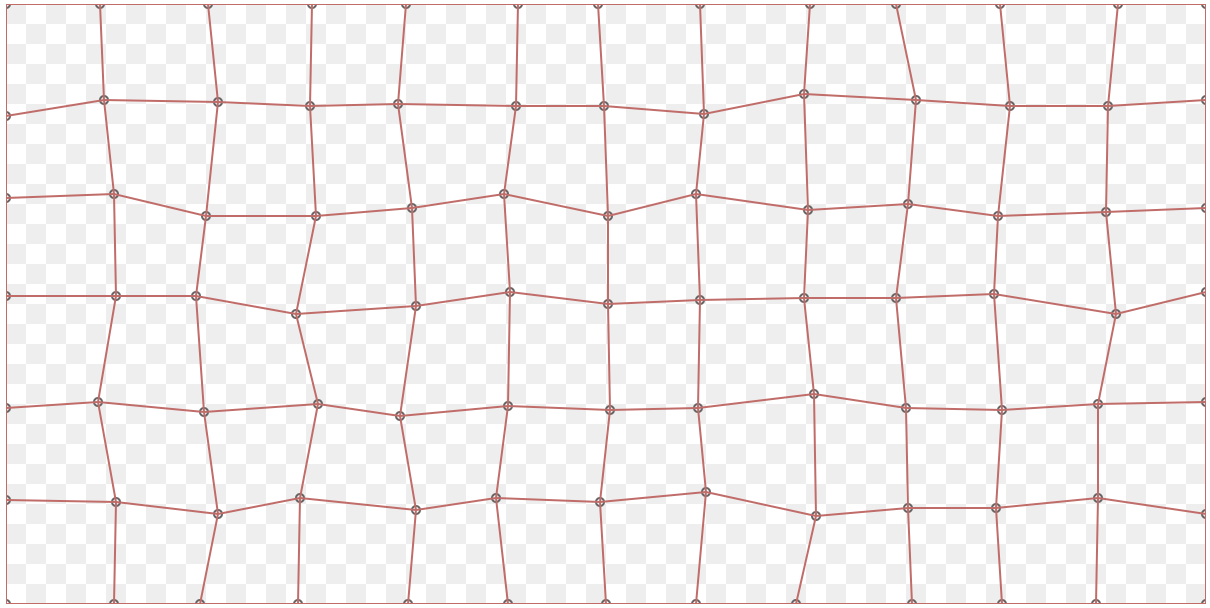 It doesn't look like much yet, but everything is goint to fall into place with this next step.

The idea is to replace each inner edge with a typical puzzle tongue shape to create the interlocking parts. We basically want this thing everywhere:

It helps to have a basic intuition about Bézier curves. For the syntax itself, I have to admit that I had to stare at the explanation for SVG paths quite a bit.

Basically, there is a syntax for cubic splines (a curve with two points and two control points), and then there is a special syntax for chaining a bunch of them together. We're looking to generate something like this:

The coordinates above are for the points on the curve, and their respective control points. The letters are a way to tag which is which, but then also one of the control point is omitted, because it's symmetrical to the previous one.

Super easy to get confused! For example the endpoint is the only one where the control point coordinates are specified before the point itself... Time to define a record type to keep track of which coordinate pair means what.

Here it is, along with its drawing function:

Try it out on Ellie or read the full code.

Now we have one last fun problem to solve. Given an edge, fit the tongue shape into it. There should also be a parameter that decides which way to flip the piece. I used a boolean, but it would be good to define a proper type like

Generating these randomly is exactly as easy as generating a list of Bool, so boo for my laziness.

Here's my way of doing it. It's basically a linear interpolation between the edges and the curve points. This is definitely something that is a lot nicer to do with elm-geometry, since you can just define a base shape and then rotate, translate, and scale it in the right way.

There are definitely a bunch of magic numbers in the above, but since I had to get it done, there wasn't any time to create a nicer abstraction. But it works, so I'm not too bothered.

Let's hook it all up! I'll let you figure out for yourself what some of the additional code does.

One last time, you can see everything together in Ellie, or have a look at the final code. 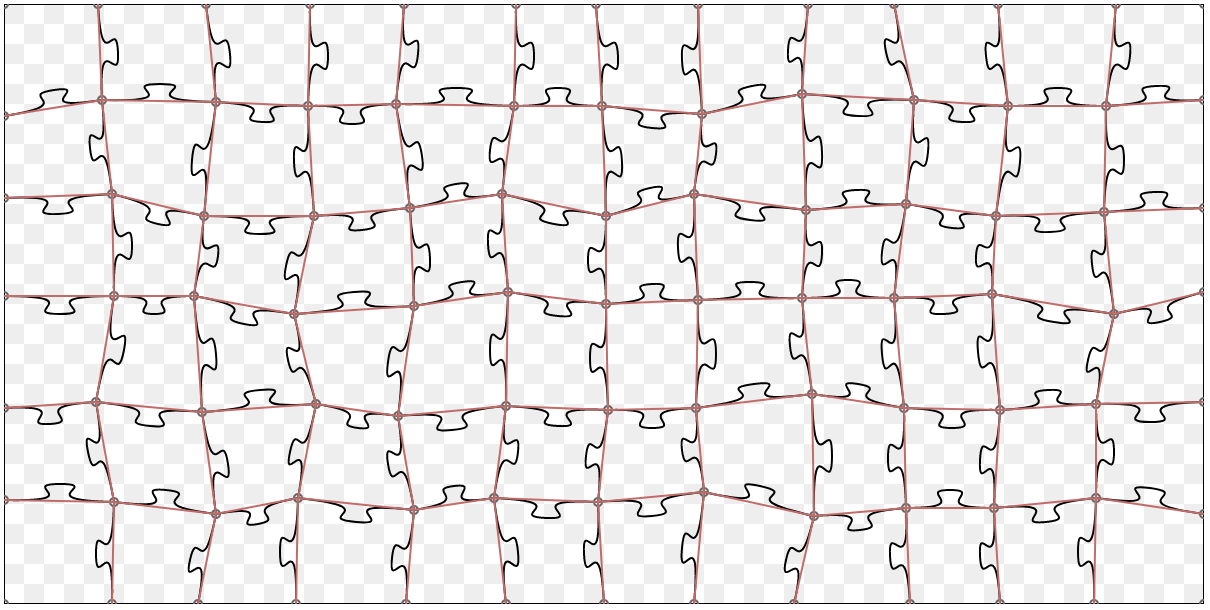 Switch draftMode to False, and you can see the final puzzle in all its glory: 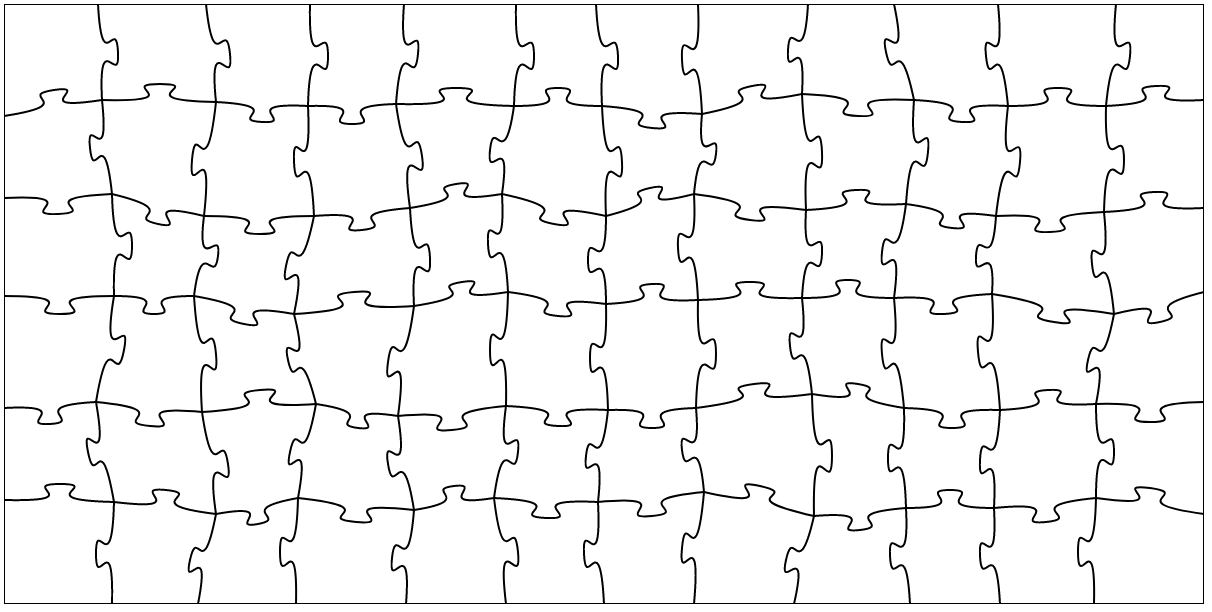 One important thing I almost forgot! You've now generated some fantastic SVG code, but how do you get it out? I really had no more time to display the DOM string, so I just did it the simplest way possible: copy-paste the generated SVG from the site's source code: 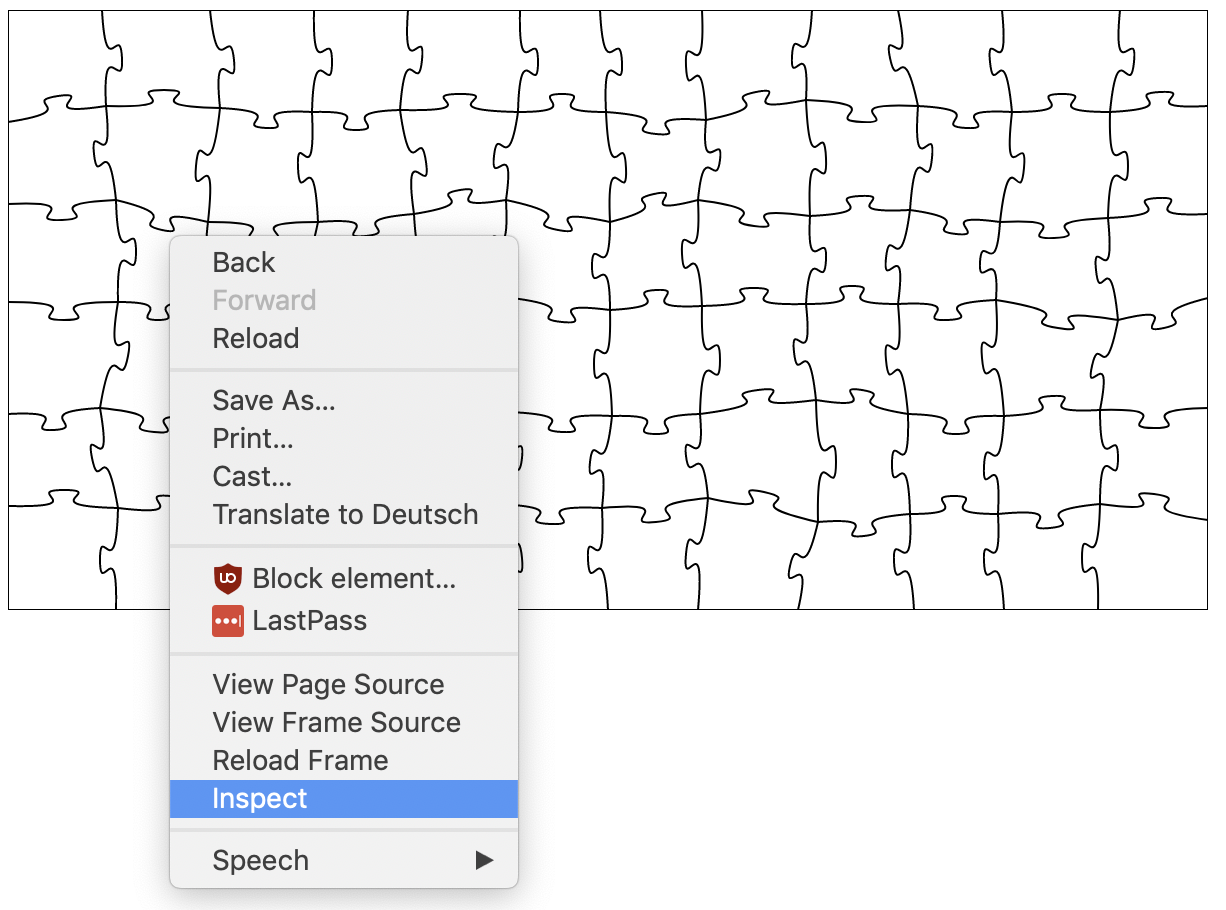 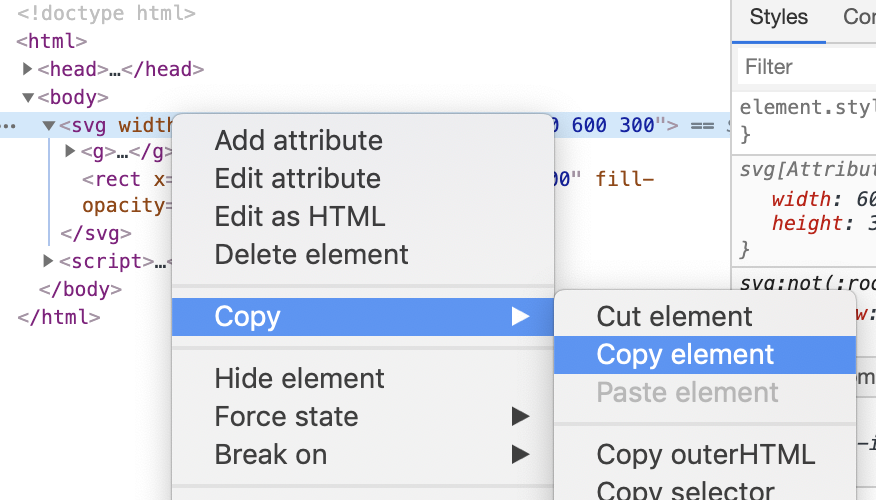 This is so dumb, but these kind of quick & hacky solutions make me very happy! Obviously if you wanted to export an hundred of these you could easily display the svg string, or even hook it up to a button that copies it into your clipboard. If you know of a way to make elm download an svg file generated from this, let me know.

Save this as an .svg file, or use some feature/plugin for your vector graphics editor. I used SVG-insert because I happen to use Sketch.

This tutorial only shows the final happy path. It took a little bit of work to come up with a nice way to express and solve this problem, so don't be frustrated if you get stuck on some seemingly simple parts. Jump to the fun failures below to see some of the garbage I produced to get here.

I'm sure there are lots of improvements to be done, but I'm quite happy with the readability and the flexibility of the code.

Here are a bunch of photos of the physical result of all this work. 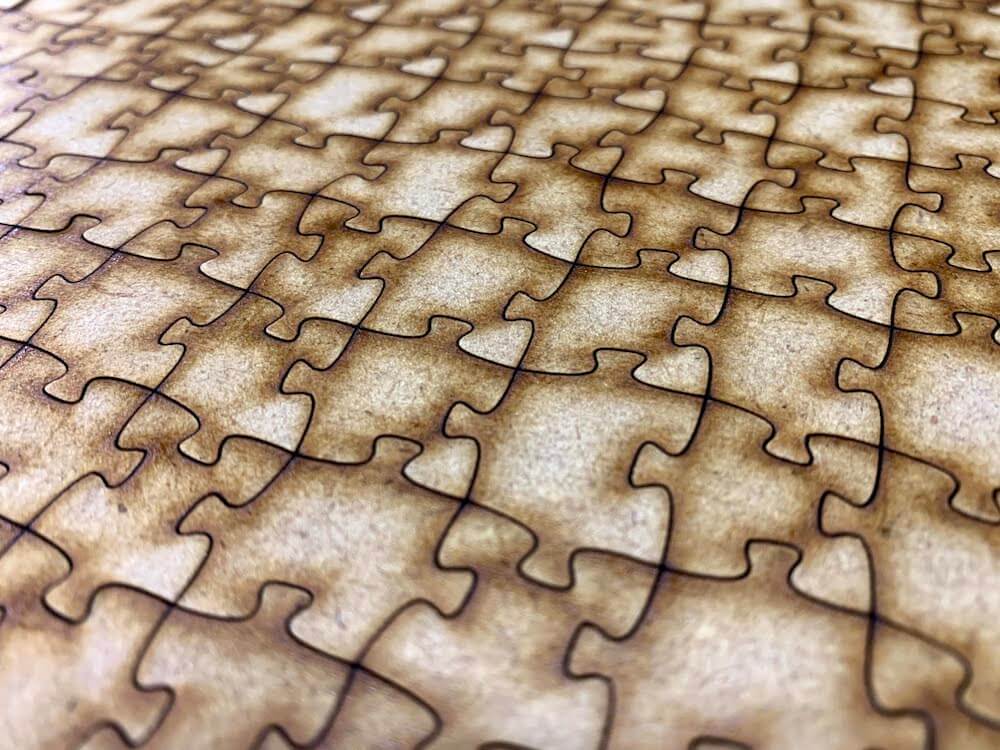 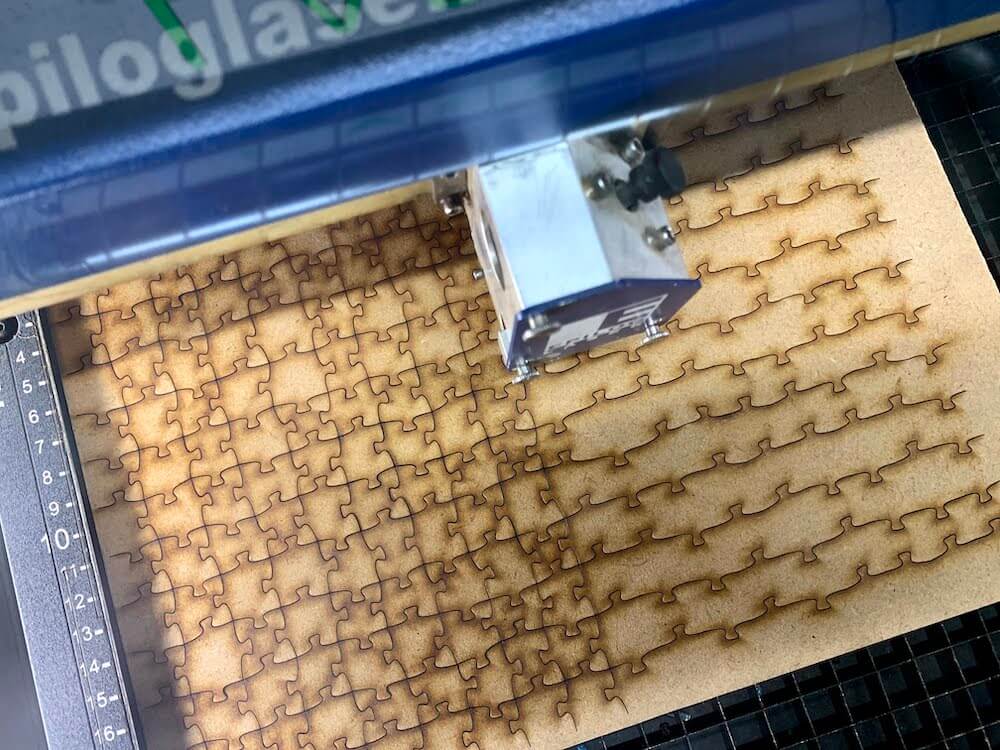 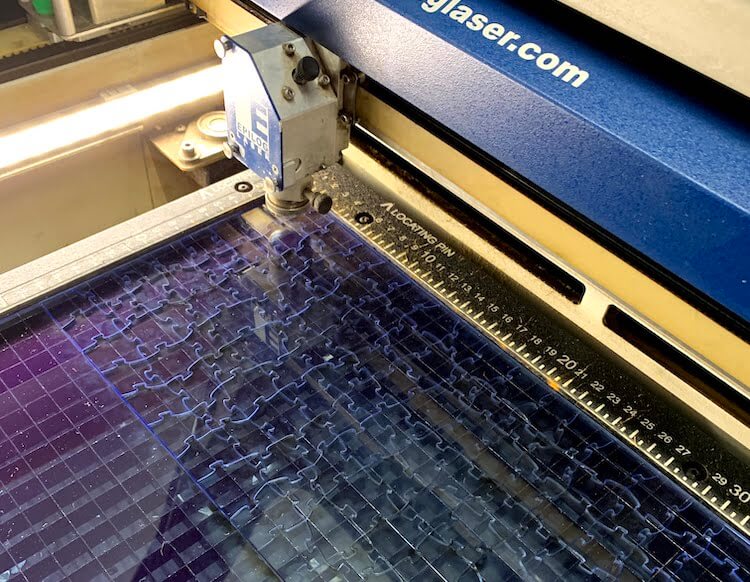 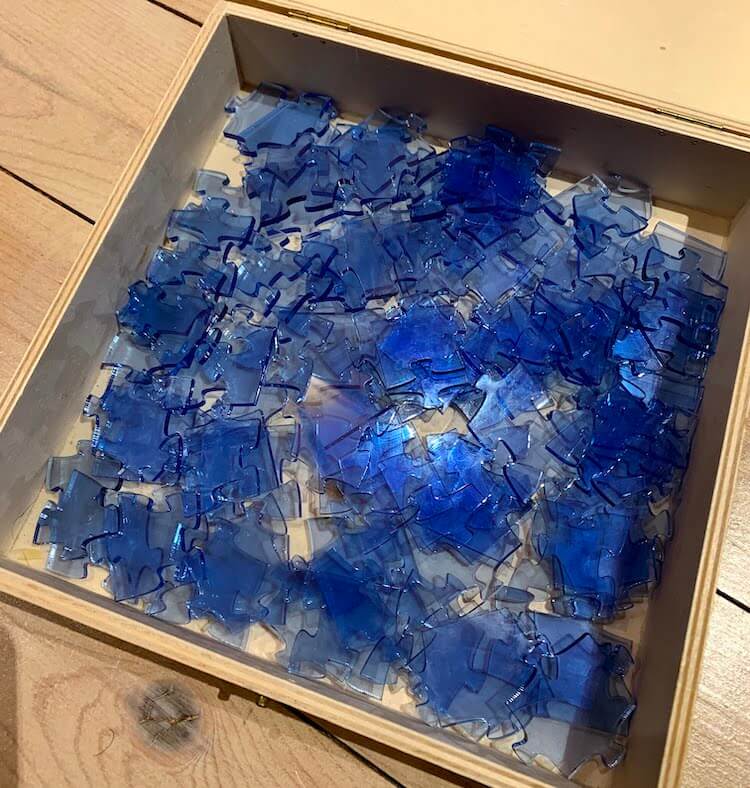 It even cuts plexiglass! This machine is seriously so cool. 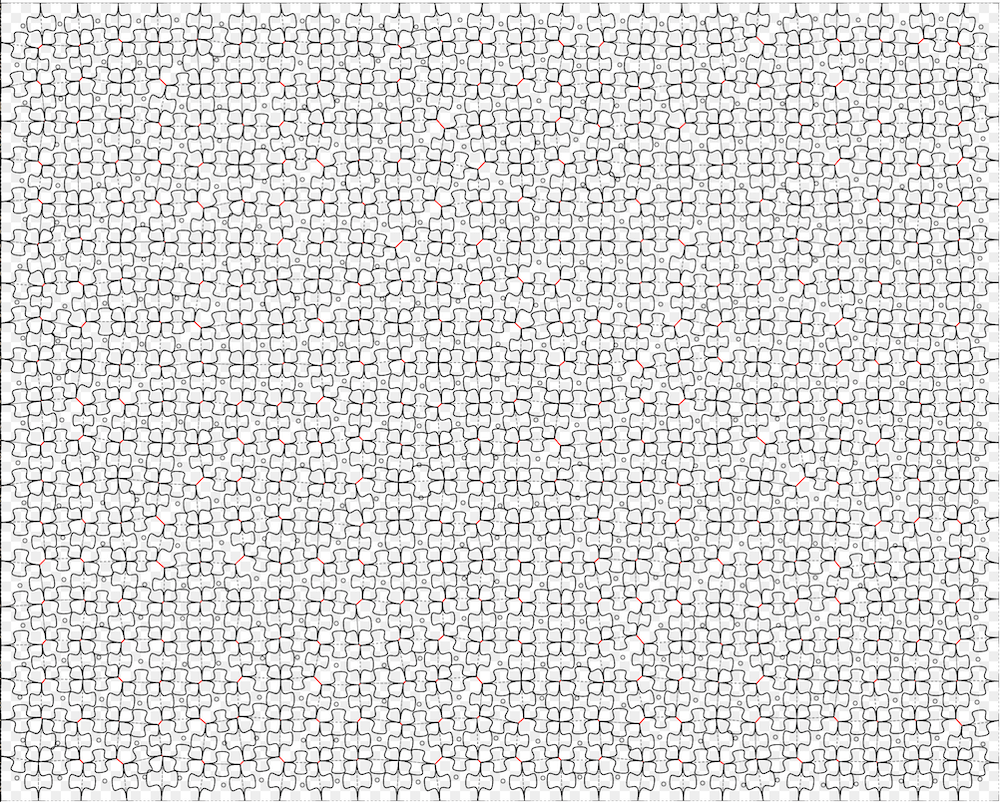 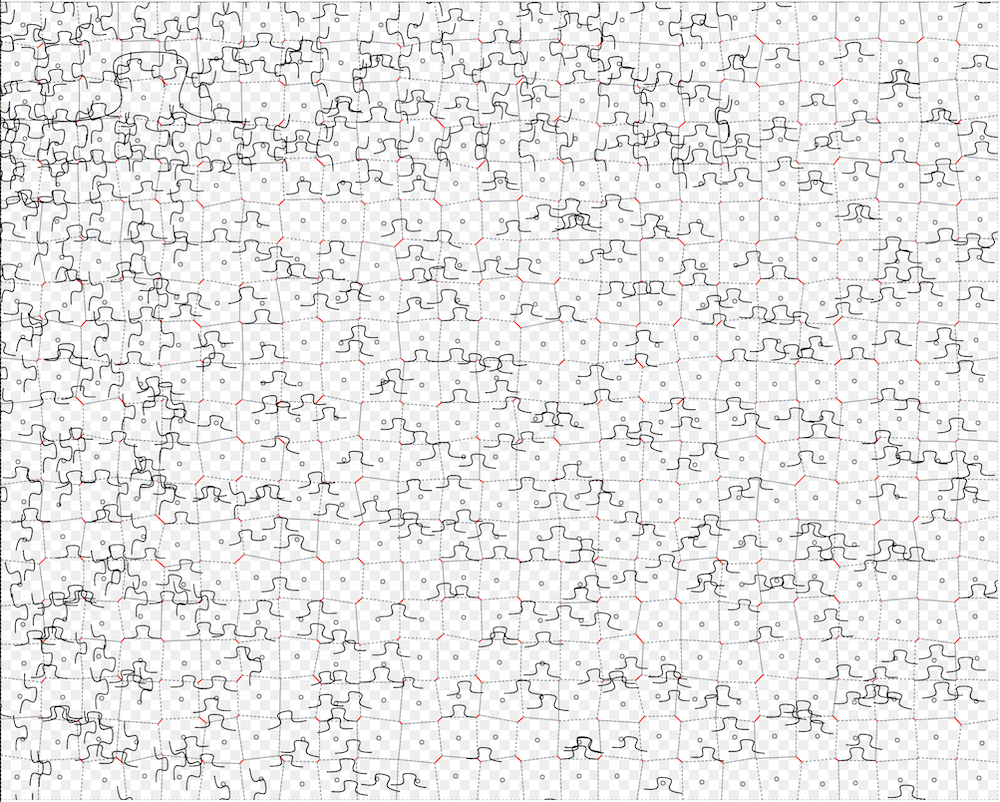 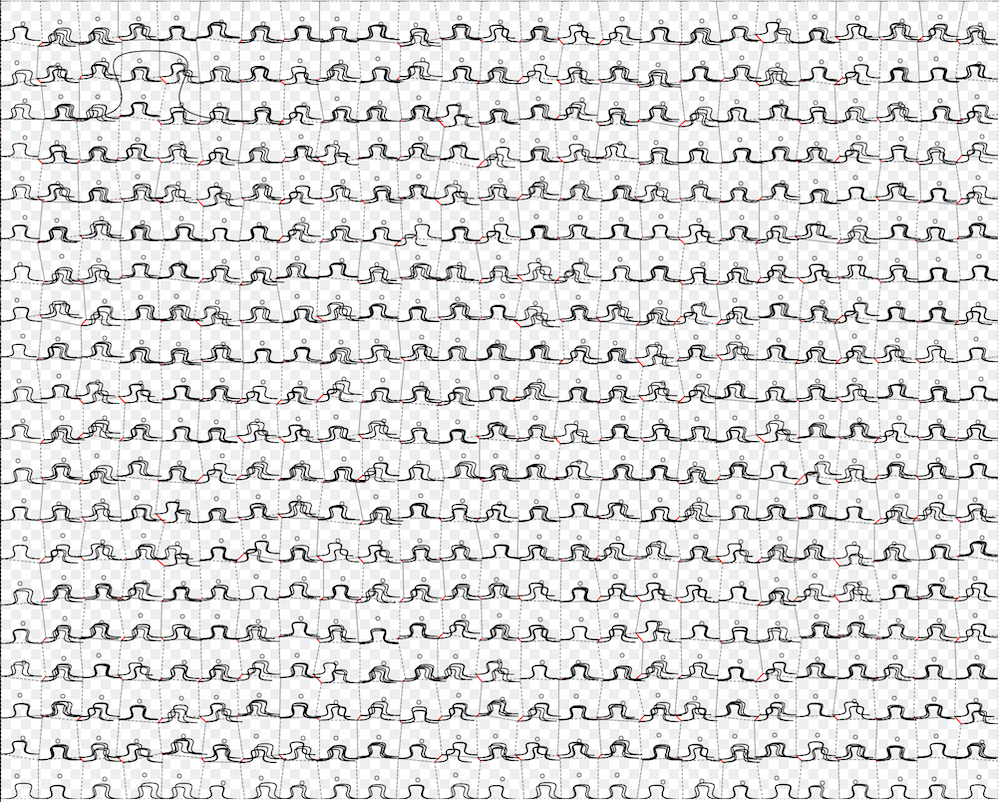 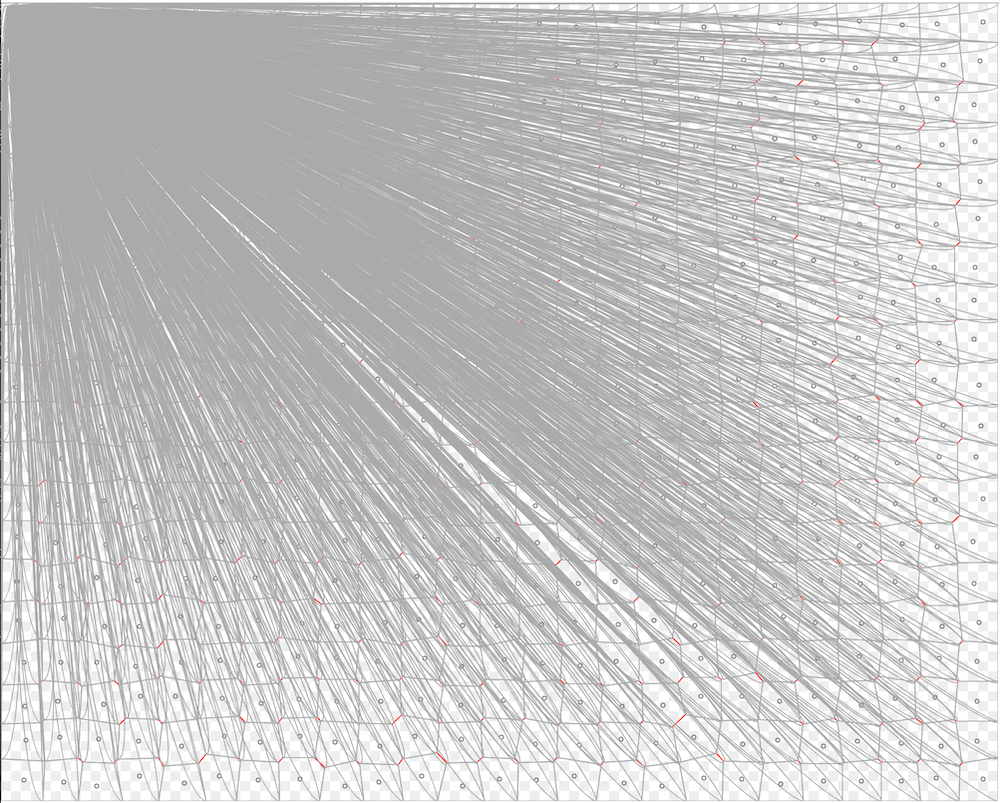 If I have more time, I would like to improve several things:

Feel free to send me pull requests if you happen to hack on my code. 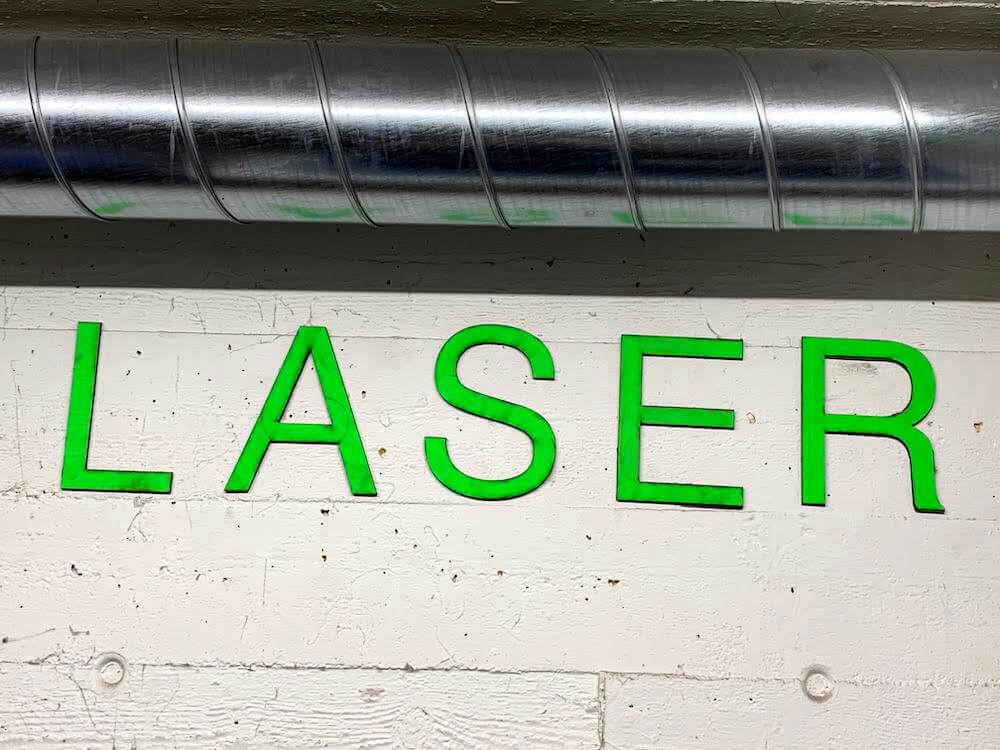 You don't need to own one, check your local maker spaces. There is one at a community workshop in my city, and a friend was nice enough to teach me how to use it.

One problem was how the paths in the generated svg were laid out. In particular, the first time I went to cut out my puzzles, I learned that the algorithm to generate the cutting path is not particularily fancy. If you've ever looked at the source code for an SVG file, you've noticed that it's just a bunch nested of XML elements, which describe the rectangles, circles, Bézier curves, and other shapes.

It turns out that the laser just cuts the path in the same order as they appear in that file. This works fine for small puzzles, but for larger ones this means that the head has to jump around a lot if the path order is quite random.

Long story short, my paths were in a pretty random order, so the cutting time estimate on the machine for a medium sized puzzle was 30min. This wasn't feasible with the way the machine is rented out. So I decided to go back and optimize the path generation to somehow group long chains of consecutive sub-paths together. 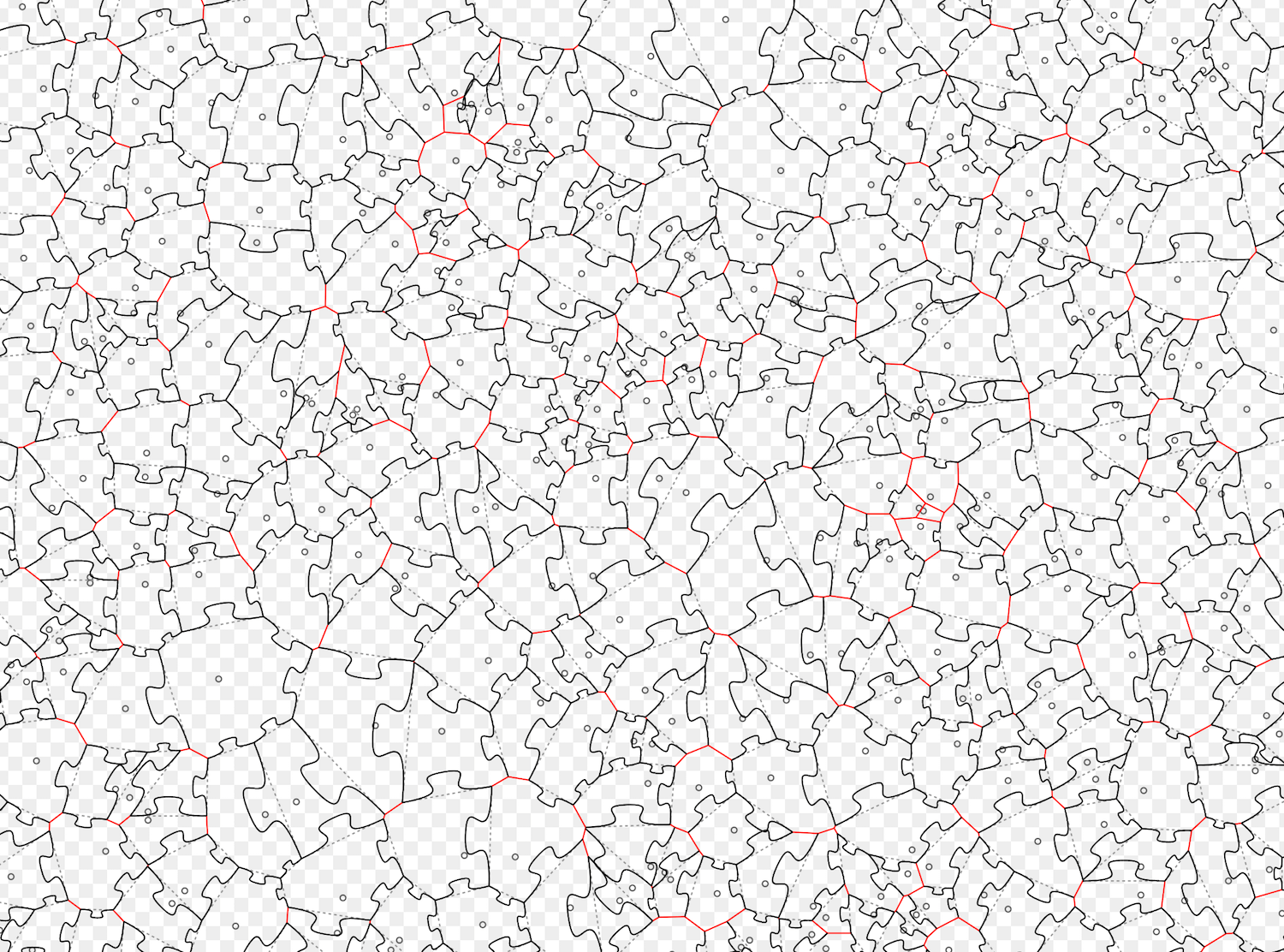 hi there, well done with the scrolling! nothing more to see here. the blank space is so that jumping to footnotes doesn't suck.